Today I received my best present ever. A Wild Card Boxing Gym t-shirt sent from my brother in the states. 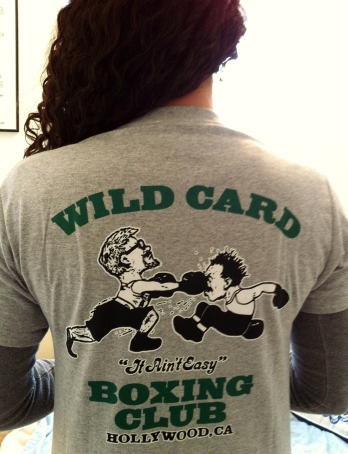 It features the Wild Card Gym owner and legendary trainer Freddie Roach as a caricature on the back. Amongst other great fighters he trains Manny Pacquiao and Amir Khan. You can see them in action in this tribute to the Wild Card Boxing Gym.

My favourite boxer Amir Khan trains at the Wild Card Gym when he’s in America preparing for a fight and I would love to see him spar there one day. I admire him as a boxer, his speed and combinations are amazing but I also think he is a fantastic role model. I’ve been to all but two of Khan’s UK fights since 2007 and I’m really hankering after tickets to his rematch with Lamont Peterson in May. But as it’s in Las Vegas I will be cheering from my sofa instead and hoping he regains his much deserved titles.

It usually surprises people how much of a boxing fan I am, it isn’t really in keeping with the other things I hanker after, but I absolutely love it. I fell in love with it as a teenager when my favourite boxers were Steve Robinson, Lennox Lewis, Nigel Benn, Chris Eubank and Naseem Hamed. I’ve still got all their fights I recorded on video. Nothing gives me the same feeling of excitement and happiness that I feel when watching a boxing match, particularly live.

I’ve had a bit of a sad week but getting this t-shirt in the post has put a huge smile on my face. You can buy yours at the Wild Card Boxing Store.